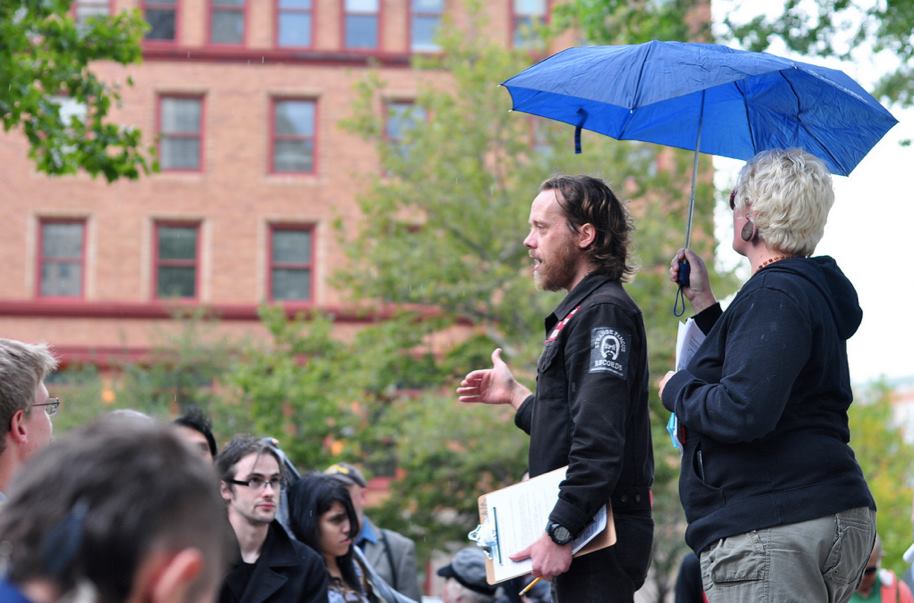 The following is a copy of the email I sent to the Executive Director of Poetry Slam, Inc explaining why I’ve chosen (as much as it hurts me to do so) to withdraw from the 2011 IWPS:

This is crazy, but I have to back out of IWPS. I have a great deal of respect for the history of the tournament and the work that goes into the whole process, as well as for the competitors in this year’s competition, and I have been training harder than ever to be ready for Cleveland, but shortly after those girls got maced at the Occupation of Wall Street, an Occupy Providence movement started in response.

Since then, I’ve gone to every Occupy Providence Assembly; seven 3-5 hour long meetings in the last eight days and I’m now one of the most involved planners for the Direct Action working group (tasked with helping the Assembly to plan march routes, non-violence tactics, logistics of the occupation, etc.) Our occupation starts on Saturday, October 15 and we’ll be working everyday till then.

The timing couldn’t be worse. I believe in the work I was planning to bring to IWPS with every fiber of my being, but we’ve been getting 100 people a day out to our meetings, and I cannot in good conscience walk out on the community that has come together here in Providence at this most crucial moment. Further, the bulk of my work is based around pushing and preparing for the kind of movement that is happening right now. I’ve searched my heart, and, based on what I believe about mass action, the body of work I’ve built, and the messages I’ve pushed, I couldn’t live with myself if I was on stage yelling about the movement I’ve waited my whole life for, while 650 miles away, at that very moment, the city I’ve been organizing in for the last 12 years (my home) was attempting its most serious, grass roots challenge to plutocracy/oligarchy/imperialism in decades, if not ever.

I’ve prayed on it, sought the insight of close friends and family, and beat myself up, even cried over it, but I’ve come to a final decision. I wish I could’ve let IWPS and whoever may take my place know sooner, so that the appropriate planning could have begun, but I myself did not know until now. I sat down to write this email the moment I was 100% sure. I understand how much work goes into planning and putting on a Tournament of this magnitude. I understand how much it means to those competing; it was among the greatest honors of my career to train for and represent Providence at IWPS in 2004, 2006, & 2007. I’ve been training and planning for IWPS 2011 since early August and I built my whole October schedule around it, but there’s no way that I could have known that the Occupy movement would come to my city like it has. There was no way I could’ve known how completely engrossed in it I would become, or that the occupation would begin on 10/15, and so, it is with a heavy, but resolute heart, and the greatest of respect for the slam family, for the competitors and organizers of IWPS 2011, the integrity and craft of performance poetry, of serious writing, and of being what you speak, that I officially withdraw from the Tournament.

With deep regret, but unwavering hope for tomorrow,

Thankfully, she was very kind and understanding. I appreciate it very much. I love my Slam Fam and I’ve got so much respect for the work yall are bringing! I’m positive you’ll go out there, break stages in half, kill mics, and leave Cleveland talking for years. Do your thang, and maybe pour a little organic almond milk out for your lil’ vegan comrade! I’ve made an ugly choice here and its fucking me up a little, but, in the end, it’s the only choice I could make and still be me.

Enter your email address to sign up for regular updates on my music and art.

"Get My Ghost is the culmination of the last ten years of protesting, touring, and learning. This full length album showcases Jared’s unique storytelling abilities, making it more of a rap-album-as-memoir then a heavy handed political manifesto. "